Imagining Futures: Where Our Works Go from Here

I viscerally remember the hardback copy of My Family and Other Animals by Gerald Durrell that I grew up with. It had one of those plastic covers that curls at the edges, to protect the actual vintage dustjacket from getting destroyed. I was a child who was careful with her books, I prized them.

This particular book was a favorite, I remember reading it, having it read to me, and reading it over again, laughing at the Durrell family and their antics. Much like my discovery of the memoirs of Jessica Mitford in my teens, it was a book about a family that was like mine—it wasn’t normal.

This past Friday night, on Shabbat, I started reading My Family and Other Animals to my partner. It is still a charming book, and it certainly is a book worth reading.

It is still a book I love.

There are different ways to talk about how books age into problematic territory. We say the Suck Fairy came to our favorite texts. When we revisit them, they have mores of a different time. They rely on that sexism or colonialism as a joke or even just a problematic turning point. I don’t think we have a word for it, but sometimes it is the author who makes bad decisions, and we can no longer separate the art from the artist.

Which brings me to something I’ve been thinking about: that many of our favorite, beloved texts become problematic after time. That in fact, that is a mark of a changing society. That a story must be examined for its racism, for its colonialism—that’s good. That means that we the readers are growing, that we are learning to be kinder to the world around us. That we are changing our views to include more people and to do less harm.

With My Family and Other Animals, the text, while admittedly problematic, is still a part of me. How do I synthesize these realities? For one, I acknowledge, out loud when I recommend or read it to someone that it is problematic. I don’t suggest that my friends read it to their children without their children being old enough to grapple with the idea that we don’t behave in the ways that these people do when it comes to race or gender. I can still revel in the fact that the way Durrell’s distinctive patter washes over me has significantly shaped my own ability to turn a phrase. I acknowledge the difficulty, I acknowledge the warmth. I am capable of doing both.

But I find that I cannot simply walk away from some of these texts. I don’t need to recommend them as holy canon, but I can acknowledge both that a book has deep personal meaning and that it is a difficult or unkind text.

That’s not always possible, though. One of my most beloved books The Mists of Avalon can no longer grace my shelves. Despite the power of the text for me as a teen, the knowledge of what the author did, the scale of that heinousness, and the way that it twisted my relationship with a book which helped me identify my queerness is impossible to untangle. Everyone will have their own response to these decisions, they’re so personal that no one can make the same ones. I know people who are able to accept problematic authors as deeply problematic and still hold texts dear. I’ll bet there are some people who could never pick up My Family and Other Animals again.

Being able to consider a text for the harm that it does will ultimately serve me as a writer and a reader.

Which leads me to think about what happens to work as it ages. Are all works destined to become problematic in some way, shape, or form? As we develop as beings, learning and changing and growing for the better, will everything that has ever been written eventually need to be considered with the same eye of “I love it but it has troubling elements”?

As an author there is a part of me that almost…looks forward…to some of my own texts becoming outdated. I hope that someday the ideas I write about regarding disability will have become passé—because by that point, we’ll have changed enough that ableism won’t be quite as bedrock as it is today. I don’t hope that I personally will become a problematic author, but there is a part of me that sees my work being troubling in 20 years as social progress. (Not that I think my work will be read by anybody in 20 years, but the thought experiment here matters.)

I think that beloved favorites becoming problematic is ultimately a part of how we grow. How we change. It is a symptom of the human condition as we become more aware.

So embrace the knowledge that the things you love may become troubling. You don’t have to get rid of that book on your shelf. You just have to remember that your beloved text may need more than just love, that the respect you give it may include discussing when it fails you in your present context.

To love a book is to constantly interrogate it. That’s the only way. If you love science fiction books as much as I do, you have to interrogate them too. It’s not just the nonfiction.  The way that we consume media means that we have to constantly eye what we read from a fictional lens, too. Not only that, but because fiction often gets made into movies, sequels, or other adaptations the half-life of the harm is longer in the public imagination. So every time you pick up a book and it is set in another world, written long before some social changes have been made, you have to ask yourself whether or not it is problematic that the orcs are a certain color, or why the villain is disabled.

Where a book comes from matters, and it helps you to develop a relationship with a book beyond simply the act of loving it, but to respect the world around you.

I don’t know that I would suggest My Family and Other Animals to just anybody these days, but to people who could both appreciate it for what it is, and who could articulate the troublesome aspects for themselves. Learning critical reading skills is I think a part of what makes us book lovers. Even if you haven’t ever taken a literary criticism class, or even understand what that means, you can learn. It’s not about knowing the language of literary crit so much as starting with what doesn’t fit with the world you want to build. You can always ask questions of texts, check in with what feels right and what doesn’t. But I think the best thing you can do, if you don’t know where to start with interrogating your beloved texts is listening to the people who have strong feelings about it. Shelve your emotions and dive deep into understanding how other people view that book or story. Try to appreciate where harm has been done, and then think for yourself on how it affects you.

A story is never just a story once it’s let out into the world. 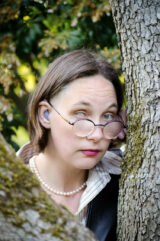 Elsa Sjunneson is a Deafblind author and editor living in Seattle, Washington. Her fiction and nonfiction writing has been praised as “eloquence and activism in lockstep” and has been published in dozens of venues around the world. She has been a Hugo Award finalist seven times, and has won Hugo, Aurora, and BFA awards for her editorial work. When she isn’t writing, Sjunneson works to dismantle structural ableism and rebuild community support for disabled people everywhere. Her work includes her debut memoir Being Seen: One Deafblind Woman’s Fight to End Ableism, her Assassin’s Creed: Valhalla novel Sword of the White Horse, and her episode for Radiolab “The Helen Keller Exorcism.”