If Love Is Real, So Are Fairies

by Cynthia So in Uncanny Magazine Issue Twenty-Nine | 402 Words

there was a time when i, viciously
in love with you, started believing
that there was a being, a living
conductor of our feelings,
like a—a fairy, i suppose, winged,
tiny, invisible to the human eye
but wondrously fast and glittering,
and she, yes, she carried each
warm thought you had about me
to me, and flitted back to you
with the silvery dust of my affection
smeared across her cheeks,
which she would brush from her skin,
and it would fall upon you like
a misty rain—the kind that is so soft
you would never want an umbrella
but only tilt your face up to the sky
and let it touch your lips. that kind.
this was a stupid thing to imagine,
but it made me feel much better
when we were far apart, to think
she was there, working her powdery
magic between the two of us,
flying industriously, with such zeal
and speed as could win her an award
in her field, so that i could still feel
your love wherever you were, a shiver
elicited by her microscopic fingers
whispering across the back of my neck.
then i went a while forgetting about
her, this mad messenger i dreamt up.
anyway, i haven’t seen you in three years.
i don’t know where you are or what
you fill your days with. but lately
i’ve been hearing the beat of her wings,
like an overly caffeinated heart.
she doesn’t transmit your love anymore.
i don’t know what she does, but
if she’s still taking particles of me to you,
i hope you can feel that gentle rain.
it isn’t love, but it is me wishing
that everything in your soul may grow
green and tall and grasping for the sun.
despite it all, despite the charred
and smoking wreck of our ending,
i still believe that there is soil in you
and not only ashes; i still believe in
the flowers i once watered daily,
even if i do not long to sit in the shade
beside you to watch them bloom.

(Editors’ Note: “If Love Is Real, So Are Fairies” is read by Joy Piedmont on the Uncanny Magazine Podcast Episode 28A.) 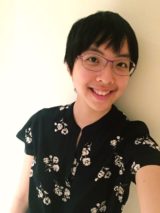 Cynthia So was born in Hong Kong and lives in London. Her work has appeared in GlitterShip, Anathema, and Arsenika, and is forthcoming in Strange Horizons. She is also one of the new voices in Proud, an anthology of LGBTQ+ YA stories, poems, and art by LGBTQ+ creators, published by Stripes in March 2019. She can be found on Twitter @cynaesthete. 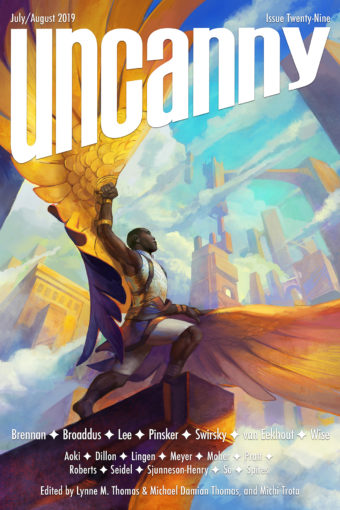