The boys arrive with the changing of the weather, ushered in by winter’s cold. Once a year, at the beginning of December, those silly boys who think coming here means they are brave. All of them so eager to test their worth on the edge of my husband’s axe.

For years and forever and for always, through one story and into the next, they have been as regular as the snowfall, these boys. They come in their shining armor, their expensive suits, their television good looks—alien things among all this green wildness, this unchanging cathedral of my husband’s making. He feels more comfortable in a place that is like him: forest, secret, overgrown.

No one ever asked me what my comforts were, whether I wanted to press myself to holly and thorn in my marriage bed.

He gives the boys a year and a day to arrive, my husband does. “I like to make it fair for them.” He laughs and oak leaves fall from his beard, holly berries roll red and fall to the floor like drops of blood.

I do not believe him. I am also an edge that those boys must test themselves against.

Here are the rules for the game my husband plays. It begins at the heart of winter, the ending of the year, at the great feasts of those brightly–lit holidays, meant to call back the sun from the darkness. Someone calls for a wonder, and he goes.

My husband is a wonder, you see. He is vine and leaf, oak and holly, tree and forest and winter, wrapped around the shape of a man. The heart of him is a green and secret thing.

And, well, there is the small matter of his head.

He will pound on the doors until they open before his blows and stand before the one who called. In the early days of the story, the summoner would be a king, overfed and drunk, in his Christmas court. Now, it is just as likely a CEO and corporate party—more drink, less food. Sometimes even the staged reality of a television show, and a room full of cameras and calculated angles. Once he has arrived before his audience, my husband will brandish his axe and ask: “Who is so bold in his blood and his brain that will dare strike one stroke for another?”

Oh, it sounds archaic now, and every so often, someone asks him to change the wording—“Why can’t you just say, ‘You try to cut off my head and then I try to cut off yours’?”—but there is a formula to these things. The words matter. Besides, no matter the phrasing, there is always someone willing to take the second part in this game, and brains have very little to do with it. They all think that they are special, they are chosen, they are as much a wonder as my husband is.

Then my husband will hand the axe over to the volunteer—a knight in armor, a lawyer in a suit, an actor in this month’s designer T–shirt—and will make a big fuss about kneeling down, bending his head, baring his neck to the blow.

The poor silly boy who has no real idea what he’s gotten himself into, how old and how unpitying this story is, who thinks he is clever enough to get himself out of it, will pick up the axe, and smile, rooster–chested, at the queen, at the boss’s wife, at the starlet of the week, and strike. The axe will bite true, and my husband’s head will fall to the floor.

And then my husband’s body will stand up from the floor, and my husband’s hand will reach into his hair, and he will pick up his fallen head, and his head will speak: “You must come to endure what you have dealt.”

Someone usually faints at this point. It’s never the person with the camera.

The rules are given, the Chapel Green, a year and a day, otherwise all honor lost. Honor. As if that was ever what this was about.

Head tucked under his arm, my husband turns, and comes home to me.

They show up early, the boys. Days, even weeks before the deadline, even now, in these days of planes and cars and GPS. So concerned with honor and reputation, with not looking like a coward, a pussy, they must pretend they are eager for the axe’s kiss, for a blow they must understand will be fatal if struck. But they think they are special. They think there is a way out, at least for them. They are almost right.

This is when the second part of the game begins.

My husband disguises himself as someone whose beard is not made of oak leaves, whose arms are not wrapped around with trailing vines of ivy, and whose head, if struck off, would remain decorously detached, and would definitely not start speaking.

He invites them to stay with us, we’re close by after all, and isn’t it better to go to such an ordeal well–rested and fed? He pours them a drink, ice rattling against crystal, and smiles.

The boys look at the warm amber color of the scotch. They think of the thread count of the sheets in this house, versus that of the cheap hotel just down the road. The boys look at me. They say yes.

He makes a deal with them—it’s the deal he always makes. “Anything you’re given while you’re here, you give to me.” He knows they’ll say yes, these boys. They are here precisely because they’re the kind of people who take dares, who say yes, who gamble. They are here to take a blow from an axe.

They think they can cheat, and never be found out.

I am to be the thing that tests their honor: to offer sweet words, to offer kisses, to offer a casual fuck. The reality TV people, they love this. It’s their favorite part, the thing that really kicks the ratings up. It’s so drama, it’s edgy, it’s just potentially queer enough to titillate once the camera cuts away.

The cameras always cut away. At least when the kisses are traded back to my husband.

When this game began, I would play along. I would tempt the boys and laugh to see which of my offers they would accept. I would kiss them and smile, knowing my husband would taste me on their mouths. If he was going to give me away, I would take what pleasure I could get out of it.

If they tell him what they’ve been given, if they return to him those kisses and more, my husband tells them he understands, that what happened was my fault, no man could resist what it is I offer. When they kneel and bare their necks to him, he swings the axe and holds, the thin and almost–bloodless line on their skin just deep enough to scar—a reminder, nothing more.

I cannot remember the last time this was how the game ended.

If the boys keep their secrets and mine, my husband cuts off their heads, and then he looks at me and smiles. This is, after all, my fault.

The first time this happened, so long and long ago, I felt the blow. A thud that landed in my chest, as if my husband’s axe had hit me in the heart.

When it happens now, the cameras cut away.

It’s so easy, if you’re watching, to tell yourself it’s special effects. The blood is added in post. That it could never happen. Not really.

It’s so easy to ignore all the hard parts of a story, when you don’t have to live it.

No matter how you bleach it, bone is never as white as snow.

And then one year, the boy doesn’t show up. It is two days after the New Year and snow is falling outside, and the cameras are waiting and my husband, green and wild, is pacing back and forth, axe in hand. Phone calls are made, texts sent, emails written, and no one can find him, this boy that is now late to his appointment with an axe. They can’t believe it; I can’t believe it has taken this long for someone to realize there is no game if you simply refuse to play.

But there is such panic. There wouldn’t be an episode, there would be no story without some silly knight and his honor, kneeling at my husband’s feet. Everyone is desperate for the end.

The cameras turn to me. My husband laughs.

“All I need do is trade blows, yes? I return to you everything that I’ve been given while I’ve been here?” The cameras love this idea. My husband shrugs. It’s not precisely the game he wanted, but it’s better than nothing.

So we crunch through the snow to the Chapel Green, to the heart of the forest. The berries are red on the holly and the air smells of pine.

I do not look at the skulls that line the eaves of the chapel.

My husband says the words of the challenge, and hands me his axe. He kneels at my feet, stretching his head towards the altar. There is blood, old, rust–colored, sunk into the stones.

I swing the axe, and it cuts through his neck as if it is nothing. His head falls to the ground. But I am not finished. I swing the axe a second time, cutting through his chest, through the twisted vines that grow where his heart would be.

My husband’s eyes close. His body does not stand. His head does not speak. I drop the axe next to his corpse.

I walk from the chapel. Blood falls from my hands, red as holly berries on the white snow.

(Editors’ Note: “The Green Knight’s Wife” is read by Erika Ensign on the Uncanny Magazine Podcast Episode 13B.) 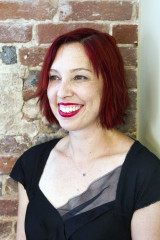 Kat Howard lives in New Hampshire. Her short fiction has been nominated for the World Fantasy Award, anthologized in Year’s Best and “best-of” collections, and performed on NPR. Her debut novel, Roses and Rot, was named one of the best SF/Fantasy/Horror books of Summer 2016 by Publishers Weekly and is a finalist for the 2017 Locus Award for First Novel. Her second novel, An Unkindness of Magicians, will be out in September 2017 from Saga Press, who are also publishing her short fiction collection, A Cathedral of Myth and Bone, in fall 2018. You can find her on Twitter at @KatWithSword.