Two: This is the way of gods and beasts, a tradition of power. The men take, the woman is taken, her boundaries malleable, her desire negligible. This is cultural, universal, axiomatic fact. Mythology is unkind, deification teeth–marked by sacrifice. If there is hurt, if there are screams buried in spools of silk, if there is grief, it is purely accidental.

Three: It is her pleasure too, this communion of flesh, this loan of agency, this borrowed might. After all, without men, what is a woman? She is only mud, only the sickle–grin curve of a rib, only an afterthought, a diversion, a vessel, empty until filled.

Flinch. Eyes dilate. Her look is not the frightened regard of a hare, but a broken–backed glare of a thing defeated but undiminished.

“Don’t call me that.” When she speaks, she can taste silk, like strands of damp hair but more viscous still, a choking flavor, semen–salty, spuming from her lungs.

“Leave.” Snapped, the word, and jagged with teeth. Her retainers—a spirit of ink and courtly poetry, a guzheng turned maiden—comply, bowing, bowing again, before they exit with a hiss of silk. She shivers. She loathes the sound.

Cotton is the only material she can tolerate on her bare flesh, cotton and nothing else. Not even wool, which reminds her too much of—she rips herself from the memory, begins to pace the dimensions of her room.

In the last few weeks, Heaven has lost its understanding of her and gained instead a kind of pity, not selfless as it should be, but rooted in accusation. Poor child, they say. Broken child. Ruined child. Stupid, ungrateful child. How hard others have fought to earn this status, giving away breath and bone and blood, all for a sliver of place in these courts of undying jade. And yet, she would slough it away, like a snake that had tired of its skin, and take him with her too.

A sigh escapes, coils into a growl.

Him. Always him. As though she was extraneous, a cancer grown on the face of a god.

They can all go to hell, she thinks, savage. She does not care. But there is one thing she does miss, does long for: her name. Only the shape of it remains now, winnowed to nothing by the passing millenias, a ghost of syllables. Occasionally, she wonders if she might compromise, might beg to be returned the appellation that Heaven had endowed in that fugue when she was merely function, neither woman nor worm nor horse.

Her lips, blood–red, curl into a sneer. No, she thinks. Never again. Even if they make her remain nameless forever, rootless, like the spectre she’s become.

Double doors open. Light cuts through the room’s penumbra, spills white–gold across her simple dress, its pattern borrowed from peasantry. She tips her chin up, unbowed. They will not have her pain.

The figure silhouetted in heaven’s radiance is new, cadaverous, unmistakably male, arms bent in the manner of a mantis. “It is time, Goddess.”

Flinch. Snarl. She provides no rebuke, chooses instead to spin a fantasy where she devours him, a piece at a time, mandibles cracking bone. She thinks of brain matter, of how it must taste, jewelled softness glimmering pink in the bowl of his skull.

One: A promise is not absolute, a singular object without nuance or end, to be consummated without question. Sometimes, it is nothing but desperation reworded into a mistake; a girl’s fear for her father, entrusted and betrayed. Sometimes, it is rewritten with an alphabet of bruises and cut lips and when that happens, how could anything be expected to stay the same?

Two: A person is not one thing, is not defined by memory or obedient to tragedy, is not a story to be folded into paragraphs, edges blurred, inconvenient truths cut out. A person can be a victim, and they can also stop being a victim, just like a woman can cease being a goddess, can start instead becoming something entirely new.

All of Heaven is in attendance. The Jade Emperor, larger than life, presides on a throne carved into a nest of dragons, armrests scaled and iridescent with gems. At his side, gods without number, resplendent in martial attire, filigreed bronze and enameled plate, weapons tasseled with ribbons of red.

The goddesses sit opposite, gowned in white, faces impassive. Around them, all the rest: celestial maidens and demigods; cats that would be men and men condemned to being cats; dragons halfway into transcendence, still finned and wet from the ocean; fox–women, insolently splendid; thousand–year pottery, freshly incarnated as nubile girls with countenances of clay.

She walks into the divine milieu and breathes, inhales the peach–stink that eddies from their pores, a sweetness to sicken. She will be glad when this is gone, when it is clean earth again and warm rain in her palms, and sunlight beating hot against her sweat–drenched brow. Will there be descendants for her to find in the land below? Great–grandnieces, ten times removed, birthed by sisters she has never met. Her father. Will she discover traces of him in them? A certain bend of the mouth, a knowingness in the gaze. It doesn’t have to be much. Just a glimmer. That is all she wants and needs.

“—you will give up all this for what really was a minor offense?”

Startled, she looks up, tongue thick in her mouth.

“Goddess.” The magistrate at her side. She wrestles the compulsion to snarl. “His Magnificence is speaking to you.”

She knows. How would she not know? Why does he think it necessary to explain? The air shakes with his puissance. But she knows better than to argue. The Jade Emperor is waiting.

“My Lord, I must humbly disagree. It was not a minor offense. He stole me from my father, transformed—”

Another interruption: the defense, hair cranefeather–white, mouth banded in scarlet. “If I recall correctly, he stole you from poverty, a lifespan measured in difficult births. Besides, you promised him—”

“I was a child crying to her only confidante!”

“Even so,” the defense continues, unruffled, “even so, you offered the terms of an agreement and he fairly accepted. A lesser creature would have simply ravaged you. Instead, he caused you both to be elevated.”

“I was a worm.” Taste of silk again, suffocating.

That first twilight when she cut herself free and became her again, just her. Mucus–slick and shivering, body glistening worm–pale in the waning light. Staring as a puddle of skins—horse–hair and membrane and white–mottled fur—writhed across blood–blotched wood.

Nights in the latrine, holding her own hair, vomiting acres of glimmering fibres, until at last they became blood–stained, gore–streaked.

“I was a worm with the head of a horse. I spun silk for the court, over and over, for thousands of—”

“And we all appreciate it.”

“You boiled me alive for the silk. I didn’t appreciate it.” She doesn’t quite shudder, although horror frissons along the column of her spine. She has little recollection of that time and for that she is grateful. She has nightmares enough.

She ignores him, turns to the Jade Emperor. “Your Majesty, I appreciate all that Heaven has done but I would be go home and, if I may be so brash, would see my tormenter suitably punished.”

Her heart seizes. “Why, Your Majesty?”

“Because of your benefactor—”

She bites down hard on her tongue, floods her mouth with copper, all to keep from screaming. Benefactor.

Allegations. Her nails dig crescents into her palm, find blood there too. “Your Majesty.”

“Having said that, we will provide a suitable sentence, one that balances both his crime and his contributions to this world.” His tone alters, subtle, informative transitions to dismissive. This matter is closed. “His form will be restored.”

“Your Majesty, no.” So soft, so frail her entreaty. How she loathes its mealiness on her tongue. But she cannot help the noise that whimpers free.

“He will serve in the armies as stallion and stud, obedient to Guan Yu. He—”

“You can’t. This is not fair. Your Majesty, what it—” It. Not he. She will not gild her monster. “—did was a violation.”

“—will be evaluated for a position in heaven after a suitable duration. As for you—”

But the Jade Emperor is inexorable. “—we will grant you your heart’s desire. Find Meng Po and she will prepare you for travel into your next—”

A ripple of answering noise.

“What?” The Jade Emperor, brows knitting together.

“Your Majesty, I appreciate your generosity but I have changed my mind. I will remain here. I will be a goddess.” She shivers, but she is not afraid. She is done being afraid. “I ask that you give me jurisdiction over the small and the hurt, the ones with no voices, the forgotten. I ask to rule the quiet places where the frightened weep, to be the ones who answer their prayers.”

“That is simple enough. But I must know, why the change of heart?”

She laps at her upper lip, trailing blood like warpaint. “Because if I do not do it, no one in this forsaken court of bastards will.”

One: The system is unjust.

Two: The system is rigged.

Three: The system is broken, but you are not.

Hurt is a pale, dark language, full of new words for fear. But it is also a communion, a dialect of knowledge, a thousand ways of saying I understand and hold on.

They gave her no temple, no priest. But she does not care. Hers is, was always meant to be, a religion passed from tongue to tongue, whispered over bruises and shouted over the crash of fist–on–flesh. Bright with fury, yes, but also bright with hope, with faith in tomorrow and faith that it gets better.

“Who are you?” The girl is small and matchstick–thin, hair snarled over a sweat–slick face, knees pushed against her chest.

They are all the same, the goddess thinks. Young, old, pale, dark. Not broken, never broken, but worn and whetted, stronger than they’d ever imagined.

“A friend,” she whispers before she calls the light. 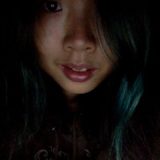 Cassandra Khaw writes many things. Mostly these days, they write horror and video games and occasional flirtations with chick-lit. Their work can be found in venues like Clarkesworld, Fireside Fiction, Uncanny, Lightspeed, Nightmare, and more. A Song for Quiet is their latest novella from Tor, a piece of Lovecraftian Southern Gothic that they worry will confuse those who purchased Bearly a Lady, their frothy paranormal romantic comedy. 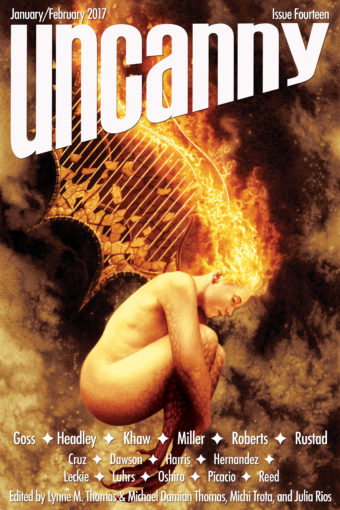