There are a lot of speculative films out there so that it’s sometimes easy for quieter efforts to be overlooked in the boom of the blockbusters. Even sadder, some films become lost, forgotten, misunderstood, and/or slammed by bad reviews for all kinds of unseemly reasons. In the spirit of celebrating the subtler efforts in speculative fiction films I present here a couple of speculative films worth seeing again, or seeing for the first time.

Morgan is a five-year-old teenager who is carefully polite when she speaks, and has an oddly white-silver-ish pallor that extends to her hair and lips. This tense film begins after something has gone horribly wrong. We are not initially told what that something is, but we can tell that whatever that something was must have been really bad because a “risk assessor” has arrived to evaluate Morgan and the scientific team that created her. The scientists walk on eggshells as they encourage the emotionless and calculating Lee Weathers (Kate Mara) to see Morgan as they do. At their shared dinner table, this group of people seemed to have formed a family. But they are not a family. They are scientists working for “corporate.” They have accepted Morgan as their child. But she is not their child, or a child at all. They have been tasked by “corporate” with building her as the perfect killer, and they have forgotten that they succeeded.

This is the first feature film directed by Luke Scott, who carefully and quietly builds a layered, deceptively simple narrative of a scientific endeavor gone wrong. This film was initially met with some awful reviews and still to this day garners a much undeserved low Rotten Tomatoes rating. One of my personal suspicions is that Scott’s familial connections may be at the heart of why this film was so harshly and carelessly reviewed. (Ridley Scott is his dad, which, of course, makes the late great Tony Scott his uncle.) Perceptions of nepotism can sometimes blind people to not see what is front of them. Here’s the kicker, though, sometimes someone from a famous family can actually have talent. But we’re not here to talk about jaded, malcontented critics. We’re here to talk about Morgan, a psychological science fiction drama and kick-ass action thriller with a subtle feminist twist. This is not your typical “action flick” with a clearly defined hero triumphing in the end. It’s more complicated than that. And for me that makes for a much more satisfying film.

There is a lot to love about this deceptively quiet film. Let’s start with the casting (and, man, does this film have one helluva cast!): Kate Mara (House of Cards), Anya Taylor-Joy (The Queen’s Gambit), Toby Jones (Captain America: The Winter Soldier), Chris Sullivan (This is Us), Vinette Robinson (Sherlock, Black Mirror), Rose Leslie (Game of Thrones), Jennifer Jason Leigh (Dolores Claiborne), Paul Giamatti (Billions, Sideways), and freakin’ Michelle Yeoh (Oh My God!).

Another thing to love is the scenery, which is beautiful, a forested Eden surrounded by wildlife and a peaceful lake. This isolated compound is the perfect place for the scientists to conduct their work. The first time we meet Morgan, we see her as Weathers see her—through the reflection of a glass separator, which is overlapped by a reflection of Weathers herself. They are the same in so many ways. Morgan has been made so that she can easily move through the world, unnoticed and dismissed as a threat because she is just a girl. So, as it seems, is this corporate risk assessor, here to do the difficult job of determining the viability of this project, i.e., whether Morgan should live or die.

In their years in this bucolic setting, the scientists can be forgiven for forgetting that they are not raising a human being. We are shown their research films of Morgan being “born” to them as proud parents and then as an endearing, curious toddler. Now, only five years later, we finally meet Morgan as an intelligent, well-mannered “teenager.” But Morgan is not a teenage girl; Morgan is an entity built for a corporation. The implantation of her emotional perceptional abilities is an experiment to see if this would make Morgan a better tool. Instead, these perceptions allow Morgan to see the world for which she has been made as it truly is—ruthless and cruel. And she reacts in kind.

So why see this film, or see it again if you’ve seen it before? See it for its cinematic beauty and the subtle undertones of its narrative manipulation. There is a feminist quality to this film that can be easily overlooked if you fall for it as a simple amalgamation of tropes. The concepts of mother and child, friend and foe, innocent and guilty, hunter and hunted, have been flipped here. The film left me wondering whether Morgan with her intense perceptions understood that the scientists (her parents) had been building her to be a killer, and that she had made a judgement upon them. If this is the case, isn’t it Morgan who has become the Risk Assessor?

Syracuse (Colin Farrell) is a fisherman hard on his luck. Or, to be more precise, he has no luck at all. His catches are often small which means he has little money; his nickname is “Circus” because people consider him a clown; he’s been attempting to remain sober in a town with no AA meetings; and worse of all, his delightful daughter has kidney disease and uses a wheelchair for mobility.

One day Syracuse pulls a mysterious and beautiful woman (Alicja Bachleda) out of his trawling net and she tells him her name is Ondine. He doesn’t quite believe this is really happening to him and this strange occurrence also makes him late to take his daughter, Annie (Alison Barry), for her dialysis. He also forgets to carry a book to read to her during her treatment. So instead, he tells her a tale of a fisherman who catches a magical creature in his nets, and it’s the tale of what happened to him that morning. Immediately Annie tells him the woman is a selkie to which he says, “he’s not sure.”

“Curiouser and curiouser,” Annie repeats this line from Alice in Wonderland, and we the viewers can’t help but agree with her. This mysterious woman with a penchant for swimming that has appeared in her father’s life has Annie convinced she is a selkie, a creature of the sea who brings luck, and if she cries seven tears will be tied to the fisherman for life. Annie is so convinced that Syracuse becomes convinced as well. After Ondine sings her haunting song and his nets fill with fish, one can forgive him for beginning to believe.

And yes, of course, he falls for her. But loving a selkie can be a dangerous business. Syracuse confesses to his priest (Stephen Rea) that Ondine makes him feel afraid because “she brings him hope” and makes him think that something wonderful and terrible is going to happen. To which his priest replies, “Misery is easy. Happiness you have to work at.”

So why see this film, or see it again if you’ve seen it before? First, Colin Farrell with his long hair is so fyne, and his brogue is so hot, it’s actually a bit distracting. (**fans self**) Secondly, this film is a wonderful example of how folklore can be woven into a modern tale. This film leaves me feeling warm inside. It’s not sappy or over-sentimental. And best of all, it’s about ordinary people with ordinary problems who are cut a little break for once. This film is a healthy reminder that when life has been hard on us, it’s okay to accept that life can also throw a good turn now and again.

Speculative films are often known for loud musical scores and explosions. Both Morgan and Ondine are examples of how a science fiction and fantasy film can be an action adventure and/or thriller without bombasticity. The impact of a quieter film can be depth and subtly, wonder and awe, and of course, a pleasurable and memorable experience. 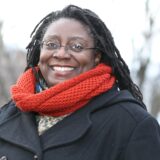 Jennifer Marie Brissett is an author that has been an artist, a software engineer, and (sometimes) a poet. For three and a half years she was the owner/operator of the Brooklyn indie bookstore Indigo Café & Books. Her work includes the novels Elysium (Aqueduct Press, 2014) and Destroyer of Light (Tor Books, 2021). She has been shortlisted for the Locus, Tiptree, and the storySouth Million Writers Award, and has won the Philip K. Dick Special Citation. Her short stories can be found in a number of anthologies such as Terraform: Watch/Worlds/Burn (MCD x FSG Originals, 2022) and Sunspot Jungle: The Ever-Expanding Universe of Science Fiction and Fantasy (Rosarium, 2019) and magazines such as FIYAH Magazine, Lightspeed Magazine, Apex Magazine, Uncanny Magazine, as well as other publications. She lives in NYC. Find her author site at www.jennbrissett.com.