Even After Death: An Essay in Questions

*what does it mean to be born of the dead?

This question hangs in the margins on pg 42 of my copy of The Deep: A gorgeous novella by Rivers Solomon, Daveed Diggs, William Hutson, and Jonathan Snipes that delves into the mythologized history of the wajinru who are merfolk, born of Black enslaved wom*n thrown overboard during the transatlantic slave trade. I have taught this tiny book in almost every single one of my creative writing classes. This is because it is the type of work that names intellectual and emotional experiences of collective grief and memory in ways that I did not know could be articulated.

Black Indigenous understandings of life and death collapse time. Afrofuturism as a placeholder word then becomes an apt mode of both explaining and living in Black grief.

“I was furious. It was as if staying alive just gave everyone else time to leave you.”

Mimi nimechoka- Me, I am tired

The audacity of someone you love to die, to just leave as if it wouldn’t break you to pieces. The fact that they will never be there for your graduation, celebrations of love, children… future. The audacity of the world to go on, to keep moving as if time hasn’t just stopped with death. Anger at the…

For not loving them enough in life, not calling to check in as much as you would have liked. For not living with death in mind. For making this about you. Do you even have a right to grieve in the ways you are? How to hold space for other versions of grief while so deep in your own? It is

Of not being able to process. Of never being the same again, of losing all the other love in your life.

What does it mean to defend the dead?

Christina Sharpe in her Black grief-centred text In the Wake reiterates this question. Sharpe correlates defending the dead with the idea of “tending to the Black dead and dying.” She emphasizes this by adding that defending the dead “means work…hard emotional, physical, and intellectual work that demands vigilant attendance to the needs of the dying and,” as she adds, “also to the needs of the living.”

“When you look at life from far away enough, the things we talk, think, and gossip about fade into tiny dots, to nothing. I think, will this all matter in thirty years?”

Majini- Spirits of the Water

Cucu Wambui (you said you were tired & you were ready)

Uncle Kariuki (I watched you fade)

Last week another name was added to this list but the time between that loss and the writing of this essay is too short for me to process the addition. On paper, names appear as dead things. On my tongue, they are living stories inhabiting the air between me and anyone who would care to listen. This memory reliving is tending to them (the dead) while tending to myself (the living). To my people, a person does not fully die until the memory of them is completely erased. The hopes and the limitations of language.

Diasporic Black Indigenous understandings of the metaphysical don’t need the word magic. In our communal memory the metaphysical has always been a part of the physical and not apart from it. Yet we do have words, words such as juju, uchawi, vodou, and so on that speak to specific magics which cannot be removed from their long, nuanced, baggaged history.

I recently learned that in my mother-tongue, Gikuyu, the word ‘Ngoma’ which today is associated with the devil originally meant ancestors or souls at rest. The Gikuyu conceptualization of the departed placed them in the ancestral plain which was endless grasslands that never lacked rain or sunshine. (Basically a way better, less capitalist version of Heaven.) This realm is different from the tangible world we are in but can still influence our world.

Gikuyus appeal to the ancestors, knowing they have some influence over the course of events that take place on this plane of existence. When the British—who had already dismissed colonized nations as backward, immoral, and uncivilized—heard the prayers and petitions not directly attributed to Ngai (God) they immediately associated any other entity prayed to with the devil. Colonialism set its claws so deep into my people’s minds that we could not differentiate the meanings we had assigned to our own words from the meanings Empire had ascribed us.

Uchawi, then, instead of being positively associated with magic or miracles, was negatively associated with witchcraft and possession. Same goes for juju and ‘voodoo’—a broad term used to debase all African religions that diverged from Christianity, thus forcing us to cut ties with our grief.

In Kenya there are multiple tribes—the Luo and Luya especially—who hire professional mourners or ‘wailers’ during funerals. Ones who beat their chest and scream at the sky as the body of the departed is transported to the grave. This ritual is about permission. The wailers, by performing mourning offer an invitation to express the deep waves of grief however the body wills. It asks family, friends, lovers to experience Feeling EVERYTHING in the flailing of arms, the screaming lungs, and the stomping of feet.

“…but sometimes it shows up like a continent shifting on my chest.”

Afrofuturism is an exploration, an experiment in both the collapse of time and the sitting in the feeling of everything. Believing and living in the worlds created for Black afterlives is permission, allowing us to see our pain as valid enough to sit with in our bodies for as long as we need to. One of my favourite books of all time is Kei Miller’s Augustown, a little Jamaican novel that offers an alternative history of the Black prophet Alexander Bedward. At some point in the novel he poses the question, “What if the question is not whether you believe this story or not but whether this story is told by the types of people you have never taken the time to believe in?”

Because this story is about the metaphysical from a Black diasporic perspective, the book is asking the reader to take it as more than just a cute anecdote. The book is asking for faith. Belief in this story told by people who have historically been dismissed and called ‘mad’ for offering alternative ways of moving through the world. The book asks for belief in Black belief.

What happens when we remove the separation of the physical from the metaphysical? Afrofuturism treads on blurred lines. This we can see in everything from Octavia Butler’s world where characters have gifts like empathy—Parable of the Sower—a gift which is literally the feeling of everything, to the juxtaposition of Nana Kwame Adjei-Brenyah’s imagining of a world where a pill can take away all the ‘bad’ feelings in The Era. The blurred lines of how the Spiritual functions as the political can be seen in everything from N.K. Jemisin’s consistently rich world building to Jennifer Nansubuga Makumbi’s reimagining of East African Kingdoms. Most of these recountings of Black death and Black life from an Afrofuturist lens function as portals so that boundaries are not about lines but doors. Inviting movement between this realm and the next through storytelling.

Last year when my cousin Noni died, I was stuck in America because borders were closed due to COVID. It wrecked me.

Something about the elements of the earth makes for a beautiful description of feeling. Grief like waves. Through multiple panic attacks, I remember explaining to a friend how it felt like I was drowning and she said, “sometimes you just have to sit and let the waves take you over”—a practice in the feeling of everything.

In the moments where I was finally, briefly able to come up for air, where my chest was not compressed in, and I could breathe. In those moments, I noticed the trees. I fell in love with this one birch tree at our local park. I named it Noni because it felt like this was the gift her spirit was leaving with me.

I’ve recently been listening to this podcast on Spotify called Matirî Ngemi that goes back into my tribe’s communal archives to narrate our pre-colonial beliefs, ways of life, and cultural understanding of the world. One of the episodes goes into Agikuyu Spirituality and Religion, breaking down the history of a mythological tree that carries important cultural value in our tribe. The roots of this tree open up to portals that transfer the dying to the next realm. Can you picture tree roots as portals? Leaves and stems and branches that tend to both the living and the dead.

To witness the significance of trees to Gikuyus in this moment broke something in me that was still trying to logicalize death. I knew/know with everything in me that my cousin was communicating through the trees, instilling an assurance that I am seen. Tending to me as I recounted stories of her life, tending to her.

Isn’t the notion of a tree ushering us into the afterlife also the most fitting thing? It just makes sense.

“You say madness such as mine doesn’t exist, but it would exist in you, too, if you had to experience the ugly things I do all the time…” 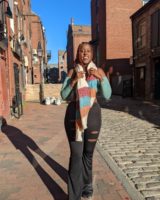 Shingai Njeri Kagunda is an Afrosurreal/futurist storyteller from Nairobi, Kenya with a Literary Arts MFA from Brown. Shingai’s work has been featured in the Best American Sci-fi and Fantasy 2020, Year’s Best African Speculative Fiction 2021, and Year’s Best Dark Fantasy and Horror 2020. She has work in or upcoming in Omenana, FANTASY magazine, FracturedLit, Khoreo, Africa Risen, and Baffling Magazine. Her debut novella & This is How to Stay Alive was published by Neon Hemlock Press in October 2021. She is the co-editor of Podcastle Magazine and the co-founder of Voodoonauts. Shingai is a creative writing teacher, an eternal student, and a lover of all things soft and Black.