“Eating Disorder” does not begin to describe it

I unzip my body like a big soft sack,
looking for more things to sell—
that’s how my grandmother survived the war.
When I was born, she wasn’t fat,
just her skin, sagging over treasures sold in hunger.
A big emptiness where all had once been—
words, family, an open window with its freshly starched lace curtain,
big cherry trees that began to bloom
again after the war ended,
the sour cherries as big and bloody as a fist.

She told me, once there was a tangle of gold
rings and necklaces inside her,
watches from all the grandfathers and their dead.
In the war, they ate turnips and stale bread,
zipping and unzipping the burlap of her stomach.

I eat because I do not remember
what it’s like to not live in the shadow of that war,
what it’s like to have security
believing that one’s house will continue to stand
unburned, believing that people live in houses
and not in the backs of carts or on the floors
of airports, at best in apartments
shared with two other families; believing
that one sleeps in beds rather than on top
of toppled armoires, or on the ground; one cannot
labor enough to escape the narrative.

This is my self-care: I unzip my skin,
take out my own treasures: a tallow candle, gold
protuberances of the sun, letters that peeled
from desecrated Torah scrolls, my lenience
towards the dirt and grime, and I put it all in poems,
or, when the guilt gets too much, into turnips:
my contribution
to the long, long recovery from the war
I have not seen, but which I am still fleeing
even as people here voted it in.

My body can’t cooperate. I stop sleeping,
I eat my way through farmers markets, gift boxes,
donation boxes, the pantry, the cafeteria,
I eat my way through sleeplessness and fear
waiting for that knock on the door
or the announcement on the radio,
shuddering with every familiar turn of phrase
in languages new to me: and yet I continue

inhabiting houses, making
elaborate dishes out of turnips, I
buy ever-expanding clothes, I
do not know how to deal with all this,
I am overwhelmed, I am self-hating, I am grateful, I am prescient,
the world keeps changing in old familiar ways,
the war forever looking to return,
people cheering it on as if nobody ever
learned anything; somewhere
my grandmother’s cherry trees are still in bloom.

I tell myself that I will go on,
I’ll just keep expanding until I outgrow
even the great war and all my immigrations,
until it is safe enough to be small,

but I know that my smallness has never been safe,
has never felt right even when it was praised
for trying; and I am done
destroying myself for the sake of that anxiety
of needing to look as if nothing ever happened;
and I am strong,

knowing that I must speak of yet worse things,
zipping and unzipping the soft cavern of my stomach.

(Editors’ Note: “‘Eating Disorder’ does not begin to describe it” is read by Erika Ensign on the Uncanny Magazine Podcast Episode 30B.) 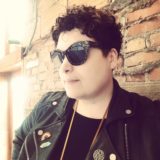 R.B. Lemberg is a queer, bigender immigrant from Ukraine, Russia, and Israel to the US. Their stories and poems have appeared in Lightspeed‘s Queers Destroy Science Fiction, Beneath Ceaseless Skies, Uncanny Magazine, Sisters of the Revolution: A Feminist Speculative Fiction Anthology, and more. R.B.’s work has been a finalist for the Nebula, Crawford, and other awards. R.B’s new Birdverse novella The Four Profound Weaves is forthcoming from Tachyon Press in 2020. “Eating disorder…” is a part of their larger project in progress, Everything Thaws. You can find R.B. on Twitter at @rb_lemberg, on Patreon at patreon.com/rblemberg, and at rblemberg.net. 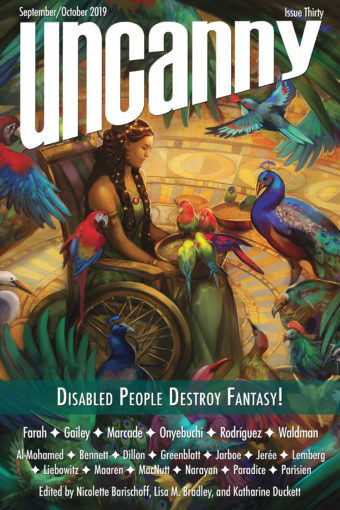