I’m writing this in the corner of an empty house, my aging laptop propped up on a retired army duffle bag found at the surplus store. When Elsa reached out to me and asked if I could write an essay on disabilities and fiction I was elated (Uncanny Magazine is awesome and I’ve loved the Destroy series), but what quickly followed was doubt. I knew I was moving 3000 miles from Alaska to Washington, a move that would require writing in a corner waiting for furniture to arrive. But there were other doubts…

Am I disabled enough to tell this story?

Am I informed enough to speak for the three million people worldwide estimated to have Ehlers-Danlos Syndrome?

Did I have a right to be in this anthology at all?

Welcome to the mind of someone who is invisible.

I was born with Ehlers-Danlos Syndrome and diagnosed before the symptoms were ever manifest. It’s an odd genetic quirk that affects the collagen (connective tissue) that makes up 90 percent of your body.

In my youth that meant being a little more flexible than others, in my twenties it meant having a little more joint damage, by my thirties it meant daily pain and dislocations. I became fluent in the language of Spoonies and Zebras, the people whose illnesses and conditions aren’t readily visible to the naked eye but who are nonetheless suffering from an invisible affliction.

Often, we become as invisible as our disorders. Washed out of life by waves of movies showing only the healthy, only the happy, only those who can fight through their pain to win the day. Unless, of course, we’re meant to be someone’s inspiration, a trope that makes me sharpen knives and smile in the darkness waiting to dance on its grave.

With these syndromes that people struggle to pronounce often come far more familiar words: depression, isolation, pain, loss, fatigue. We wake up in pain, crawl through our bad days, and fall back into the blankets at night with muscles burning and cheeks carved by tears. It hurts to live some days.

But, from the outside, people like me look healthy. We look abled. We look like someone who doesn’t need the disabled parking sticker, or a cane, or a wrist brace, or a cupboard full of pain killers.

When it comes to outreach we’re often cut from the narrative.

As a friend once pointed out, she could walk up the wheelchair ramp to a building just fine, the problem was she couldn’t open the door without dislocating her wrist. Everyone who saw her would see a healthy human being glaring at the door in frustration. No one would stop to think she was psyching herself up for the burst of pain that would come while she fervently hoped someone would open the door for her.

And that’s what we all want, isn’t it? Someone to open the door for us so we are spared the pain? That’s what I want to do for other people.

Someone once said that the surest way to change the future was to create it. Nowhere is that idea truer than in fiction, especially science fiction. The worlds writers create, the ones readers are invited to inhabit, set the path for the future of humanity.

I’ve thought a lot about that over the years and how to introduce Ehlers-Danlos Syndrome into my fiction. It’s hard, in part because I write to escape but also because any good editor is going to flag Ehlers-Danlos symptoms as unrealistic. A disorder that cause chronic pain and is co-morbid with a gene deletion that makes pain medication useless, what are the odds of that happening? (Answer: way higher than I and everyone else immune to morphine want it to be.) Skin that can be cut by a washcloth? Shoulders that dislocate because gravity on Earth is too heavy? Skin pulling away from the human body and stretching for inches? None of that sounds plausible.

In fact, when I first wrote Ehlers-Danlos into a story I did it unwittingly. I was describing a moment of extreme anger and frustration for a character and I wrote about her clenching her fists so hard her palms bled.

My editor wrote back saying that simply wasn’t possible. The skin on the palm of the average human hand is pretty thick. It resists being cut. It’s Ehlers-Danlos skin, with the mutated collagen and bad connective tissue that slices easily. I’d given a character the body I knew because I didn’t realize it could be any other way.

I actually talked with my editor about taking the reference out, but left it in, unnamed but there for the readers like me. Because people like me deserve to see themselves as more than victims, or inspirational stories, or undesirable flotsam washed away by technology.

Now is our chance to put disabled people back in the narrative.

This is our shot to show the whole world what the universe looks like through the eyes of someone fighting an internal battle every day. Whether the struggle is depression, social anxiety, faulty genes, or broken limbs, everyone who falls under the huge umbrella term of Disabled deserves to see themselves not just as someone’s sidekick, but as the heroes of fiction. To see ourselves as royalty, space pilots, daring adventurers, dinosaur wranglers, protagonists, and villains.

What disabled people need is what everyone looking for good representation in fiction wants: not one perfect example of wholly inclusive rep, but many examples. I want to see disabled people occupying all the same human spaces that abled people are welcomed to occupy. That means disabled people of all colors, cultures, languages, and types living in fiction where disability is part of who they are and not their entire story. 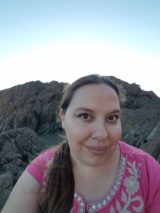 Liana Brooks writes science fiction and sci-fi romance for people who like fast ships, big guns, witty one-liners, and happy endings. She lives in the Pacific Northwest with her husband, four kids, and giant mastiff puppy. When she isn’t writing she enjoys hiking in the redwoods, playing at the beach, and watching whales.

You can find Liana on the web at lianabrooks.com or on Twitter as @LianaBrooks.