BFFs in the Apocalypse

The ableist world would like us to feel alone. At fourteen years old, recovering from massive medical malpractice and teaching myself to walk again, school was Hell. I was mocked, had my books thrown, and when I staggered, boys would often “bump” me to try to topple me over. It’s easy to think I was always alone, but there was a boy with acromegaly, 6’4” at fourteen years old, who would walk with me to ward away the abusers. There was an autistic girl who couldn’t follow some lessons in Math class, so we hung out in our free period and I shared my notes with her. Disabled people have a knack for finding each other.

Being a disabled character is lonelier than being a real person. The disabled hero is too often alien in their home town, surrounded by non-disabled antagonists and admirers. Quasimodo fixates on Esmerelda. Barbara Gordon was an excellent character as Oracle, but she rarely shared stories with any other disabled characters—except possibly the insane villains she directed heroes to punch.

I grew up starving for the communities I knew to circulate through fantasy and science fiction, and instead found entire publishing catalogs full of books where never so many as two disabled characters were in the same scene. As is the way, I gradually thought I was weird for wanting it. When you don’t know better, you learn to self-shame.

And that’s one of the reasons Stephen King’s The Stand means so much to me.

After a super flu kills most of the population, Nick Andros looks like he’s going to be spectacularly lonely. He is deaf and non-verbal, and knows so few people who care about ASL that he carries a notepad to simply write to them. As other main characters meet each other on the road, it’s clear he’s destined to converge with them as the book’s token disabled guy.

But on the road, Nick runs into Tom Cullen—literally, almost running him over with his bicycle. At first, they’re overjoyed to see another living person. Tom has a cognitive disability (the description of which has aged terribly since 1978), and can’t read Nick’s notes.

I remember tensing up in my chair as Tom grew angry, believing Nick was making fun of him.

Then in a moment of particularly King-ish irony, Tom uses an ableist insult he’s heard all his life: “What are you, anyway, deaf?”

It was one of those moments we all have, when we realize what an idiom means and regret it. For Tom, it gave him a revelation. What he was missing clicked.

Immediately the two adapted to each other. Tom stayed in Nick’s line of sight for lip reading. When Tom needed medicine, Nick read the labels. And when Tom couldn’t ride the bike Nick owned, Nick didn’t leave him behind—the two just hunted down a simpler model that Tom could use.

It took Nick a while to successfully invite Tom to come with him, but the moment when Tom realized his new (and only) friend wanted him to partake in this odyssey across America, was tremendously sweet. They look out for each other long after they find a haven. They become BFFs in a world where most friendships are dead.

It’s what I would have done. Many of the disabled friends I had when I first read The Stand are now dead, and when I re-read those parts, it feels like a memorial to our bonds. On some particularly gloomy nights, I re-read my copy and imagine pedaling alongside Tom and Nick.

Some of the disability rep in The Stand is dreadful, but that’s why we need more stories. There have been too few such friendships in speculative fiction in the nearly forty years since The Stand became a classic. Especially in our beautiful Genre of Ideas, where we seek to explore everything in the human condition, the friendships of the disabled should flourish. We should not be alone in our stories. 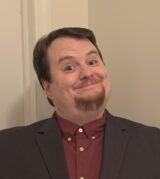 John @Wiswell is a disabled writer who lives where New York keeps all its trees. He has won the Nebula and Locus Awards. This is his fourth story in Uncanny Magazine, and his works have also appeared in Tor.com, the LeVar Burton Reads Podcast, the No Sleep podcast, and The Magazine of Fantasy and Science Fiction. His debut novel Someone You Can Build a Nest In is forthcoming from DAW Books in Spring of 2024.