Across the Afterverse: A Conversation with Afropunk SF/F Author Alex Smith

I first encountered Alex Smith’s writing when we were both published in a tribute anthology for Samuel R. Delany called Stories for Chip (Rosarium Books, 2015). His fiction was dense, anarchic, compelling, and blazed with an overheated sense of wonder. I knew I’d be seeing more of him, and Alex has continued making a name for himself ever since. We recently sat down for a Zoom chat during his successful crowdfunding campaign for Issue #2 of his queer cyberpunk superhero series, Black Vans.

Alex Jennings: Your art, writing, and music are deeply connected to Philadelphia. Is that where you were born and raised?

Alex Smith: Born and raised in Greenville, NC, but I’ve lived, loved, and grown here since 2002! Even though I only moved here when I was 26, I’m a lifer.

AJ: What brought you to the SF/F field?

AS: Honestly, I still don’t feel like I’m properly in the SF field. It feels very regimented, very exclusive in a lot of ways. Like, there are too many tiers and hierarchies and sometimes it reminds me of the Church, which makes sense considering a lot of sci-fi stories are structured—usually subconsciously—like some kind of tiered religion; see Harry Potter or nearly any story with authoritative “world building.” I don’t know what cons to attend and how to submit, or any of the protocol, I just try to write wild, explosive, hyperactive stories filled with queers and gays, Black people doing strange stuff, fat people being free. I definitely create speculative fiction across several subgenres, but I am also hyper-aware of my outsider status. I’m thankful for all the opportunities I’ve had, though!

AJ: How do you feel your work fits into the Afrofuturist movement?

AS: Squarely and properly, I think. I’m pretty excited about my association with Afrofuturism and the qualities that it brings to sci-fi and speculative story telling! I’ve been doing Afrofuturist work since 2011, around the time I met my friends in the Metropolarity sci-fi arts collective—Ras Mashramani, Monk, Camae Ayewa a.k.a. Moor Mother and of course, Rasheedah Phillips, who started the Afrofuturist Affair and Black Quantum Futurism. I was always hesitant to align with it at first because it seemed like, on the surface, some head-in-the-clouds, pseudointellectual shit, but really it’s totally punk rock, totally hip hop in its scrappy, DIY nature. It’s a lot more cyberpunk than people give Afrofuturism credit for. Queer Black people reimagining their future is what I’m 100% all about. The definitive book hasn’t been written on the movement, but from my view it’s always represented rebellion married with an appreciation of speculative movements that have come before—African spirituality, the griots, Harriet Tubman, Marcus Garvey, Sun Ra, the Black Panthers, Rammellzee, the Detroit techno musicians—all of whom represent that lineage. I’m carrying it on.

AJ: Who are some of the major influences on your work?

AS: I learned how to write reading Sports Illustrated in the mid ’80s, being fascinated with how they told stories about basketball players as if they were both mythic geniuses and regular people whose lives have these epic arcs. Comics and comic writers like Grant Morrison (especially), Samuel Delany, and Octavia Butler of course, especially Delany—his work, his existence, and his poetic, otherworldly writing style and conceptualization, confirmed to me that the themes and subject matter that interests me and how I engaged with them had a place in SF/F. Also, in my late teens and early 20s, I really mostly leaned on Black post-Beat and post-modern Black writers like Ishmael Reed, Walter Mosley, Andrea Lee, Victor LaValle, Colson Whitehead’s The Intuitionist (ugh, so many of my early stories were just re-treads of this book!), Percival Everett, Paul Beatty. These writers aren’t necessarily sci-fi, barely speculative, except for some flourishes, but their writing is so powerful that I wanted to bring the things that make their work literary into my SF/F and even into my superhero writing.

AJ: It’s clear from Black Vans and your other comics work that Body Positivity and Fat Positivity are important to you. What brought you to those movements?

AS: So, I’ve never been a fat person, but obviously I’ve had fat friends and fat lovers; it always stuck out to me, even at a young age, that this group of people have been wildly underrepresented in comics, film, television, and literature—except as a villains, tough guys, sad sacks, and representations of evil—and I just never really got why. Activism is important to me, and my activism in the fiction I create definitely extends to fat people. It’s important that everyone can see themselves as powerful, sexy, determined, real, and whole. It’s important for so-called “average” or so-called “athletic-bodied” people to see it too! Small folks need to get over ourselves and learn to appreciate and feel empowered and turned-on by fat bodies! Fat people aren’t waiting around for their/our approval anymore, they will absolutely choose who they want as friends, partners, lovers. James Dillenbeck and I like to challenge people to recognize and observe fat bodies by INCLUDING THEM IN OUR WORK! It’s one thing to be like, “oh I’m not fatphobic,” but we are constantly criticizing our own non-fat bodies in public or excluding fat people from everything from plans to go out by failing to consider whether the environment is friendly to fat folks, or by failing to include them in our creative portrayals. It’s time to end it. Also, I like seeing beautiful, powerful people on the page, so that is why I portray them.

AJ: What was the genesis for your comic series, Black Vans? What sets it apart from mainstream superhero comics?

AS: Black Vans started as one of three synopses I sent to James [Dillenbeck]. I tried to cater each of them to James’s specific style. James chose that one, and I’ve cannibalized some of the material from the others to add a little bit of texture. The idea is what if Marvel and DC did a story about Oracle, Microchip, and Ned from the Spider-Man movies and they were all gay. The Guy in the Chair trope has made its way into mainstream pop culture in recent years, and while they assist the heroes, they’re never the stars of the story. Being used for supporting castmates means they can have all sorts of ethnic/racial backgrounds, different body types, and sexualities from the main heroes, but they’re never the focus of the story. When their heroes start disappearing mysteriously, it’s their time to step up.

AJ: You mentioned that the Black Vans leads have different body types than their heroes. Can you say more about that?

AS: Many of these are fat, queer characters who are the geeks in the van, but they’re not without their own resources and capability. Electros is heavily connected, confident, and could kick your ass. And why shouldn’t he be portrayed that way? Similarly for Bo. These are fat characters, but with dimensionality, and capability. They get underestimated by the villains, and even once the villains realize it, they keep fighting.

AJ: This story takes place in a wider universe called The Afterverse. Could you tell me a little more about that?

AS: The Afterverse is an exploration of the techno-fantastic, a multiverse where unicorns exist alongside advancements in biotechnology; where bio-appropriate nano-tech innovations are run on magical systems, all through a queer, African diaspora lens, centering Black people not just as survivors of possible dystopia, but as continued innovators in an ever-changing world.

AJ: You are active across several art forms. How do you feel these relate to and inform each other?

AS: Deeply and intimately. The music, art, writing, and comics I do are all spiritually connected even though there’s no real through story. I use similar imagery, similar themes, and similar ideas in each medium, just constantly expanding on queer Black futurism through this chaotic, spiritual punk gang feel—chaotic and free. I worked hard to sort of refine a—not a brand, but an aesthetic place in the universe. I feel like my unique take on collage art, storytelling, and song craft all blend together; all represented by a cut and paste futurism that seeks new pathways to total liberation.

AJ: What do you want to see from SF/F in five years?

AS: An integration of our ideas into the real world, into our everyday lives—not just in the form of cool gadgets and robots, but a sense of how to move in the world. That we will start living sci-fi lives, dismantling the systems and attitudes that have held the human race back. I want to see more cooperative business and collective living and working towards liberation—we’re losing our rights! I want SF/F fans to really think about what their favorite characters would do if faced with this kind of heat-death, this kind of cult hellscape—the X-Men, Neo and Morpheus and Trinity, Princess Leia, Harry Potter—fight back against tyranny. I want SF/F to breach the fourth and fifth walls and to truly seep into our minds, and not just be costumes we wear and intellectual property we consume. I want us all to live deliciously, dangerously as living science fiction.

AJ: What do you have coming up in the near future?

AS: My comic company the Afterverse, Unicron willing, will have three books in circulation: BLACK VANS drawn by James Dillenbeck; BETA BOY drawn by Steven Arnold; CHROME AND CHAOS drawn by Shawn Alleyne. My debut short story collection, ARKDUST, will appear from Rosarium Publishing on September 1! I’m also ssssslllloooowwwwllllyyy working on a rap/punk/hip hop hybrid album where I rap as different members of this queer street gang called the Amber Goons. It’s a high-concept LP that I’m taking my time piecing together, still gathering beats and bits and pieces of lyrics for it. After that, I want to start working on a novel based on the characters I’ve rendered using A.I. apps like Midjourney. We’ll see. 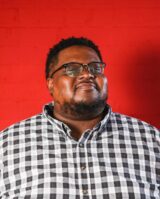 Alex Jennings lives and works in New Orleans with his dog, Karate Valentino. He was born in Germany and raised in Gaborone (Botswana), Paramaribo (Surinam), Tunis (Tunisia), and Columbia, MD. He is a graduate of The University of New Orleans. His writing has appeared in Strange Horizons, PodCastle, and Uncanny Magazine, and he is a regular contributor to The Magazine of Fantasy and Science Fiction. He manages for Dream Foundry’s Con or Bust Program and teaches Fiction writing at the Stonecoast MFA Program. His debut novel, The Ballad of Perilous Graves, is available wherever books are sold.