A House by the Sea

Would you believe me if I told you that they all live together in a house by the sea?

It would only be fair, if they did.

And would that be joyous? Would it be the happy city we live in, the happy life we enjoy?

No. Obviously, they can’t live in the City.

So, if you’ll believe me, they live together in a house by the sea.

It’s not a big house—it’s not a mansion—but it’s big enough for all of them to live in comfortably. Everyone gets their own room, and there are enough bathrooms even if some of them are touchy about sharing (some of them are touchy about sharing). They have a library and a living room and a television that doesn’t get all the channels. Outside, there is a garden, and a little trail down the cliffs to the beach.

Do you believe it? Does it seem unreasonable? It wouldn’t be too much to ask—don’t you think?—for them to have a house to themselves with a garden and a library and a television that doesn’t get all the channels.

Would it help if I told you there are a surprising lot of them living there, in the house by the sea? If you think about it, there must be. It has to be a child, crying alone in the basement that no one talks about. A baby crying in a basement is just a baby crying. An adult crying in a basement probably did something to deserve it (not that there are any prisons in the City, of course, but still).

There is, in fact, a very narrow range of suitable ages. Three-year-olds are much too young, and by twelve, honestly, how innocent could they be? Four through ten is just about right. Right now, in the house by the sea, there are nine of them, each separated by more or less seven years. The youngest is fourteen years old, the next twenty-two years old, then twenty-seven years old, and so on. The oldest is in her sixties.

Once a day an old woman comes out to tidy up, cook a meal, and stock the freezer with burritos in case someone gets hungry in the middle of the night. It isn’t her job, of course. In the City, no one has a job, except the sort of job that is meaningful and personally fulfilling, like medicine or writing novels. Still, she comes out from the City every day. Who can say why? She is an immigrant; she has her own story.

Each of them has their own routine. One of them wakes up before anyone else, walks the little trail down the cliffs to the beach, and dives into the cold gray morning ocean, alone and without fear. Another one gardens. One is writing his fourth novel. He still finishes them, revises them, sends them off, and every publishing house in the City returns them unread. Two more spend their days in the library, reading the encyclopedia out loud to each other. One watches the news. She remembers back before they had a house, and she has strong opinions about municipal politics. She makes every one of them vote, every year.

Some of them just sleep all day. Sometimes, especially when they’ve just arrived, they don’t even leave their rooms. They cry and spit and punch holes in the walls. Most of them come out eventually, but some don’t, and that’s okay. No one bothers them, except sometimes to offer them a burrito.

They don’t leave, although they could. Why would they?

Do you believe it now? Can this really be how they live out their lives, so close to the City that they can hear the bells clamoring and the processions proceeding? Can they really live together, in a house by the sea? No?

Let me tell you this, then. There used to be a doctor—a nice man with a real white doctor’s coat, who still lives in the City—who came out to their house every Wednesday to check up on them, but that didn’t work out, because he kept feeling uncomfortable and trying to euthanize them. So now, whenever one of them gets sick, a woman comes in on the train from Vallcoris. She doesn’t have a doctor’s coat. She just has a sweater. She doesn’t know about the basement, she doesn’t know about anything, not really. She just takes their pulse and asks them to cough, and leaves them with prescriptions, and no one tries to euthanize anyone.

Is that enough to convince you? Is it still too impossible, that they might just live together in their own house and their own time?

Should I tell you, then, about how they die? You see, it used to be, whenever one of them died, some nice people came out from the City to take the body away. But they were so upset—so apologetic and mumbling as they refused to meet anyone’s eyes—that now no one bothers calling the nice people from the City. Instead, they bury their dead in a small plot behind the garden. They get the old shovels out of the shed, pick a spot in the garden, and begin to dig. Each of them digs, some just a shovelful, some working the whole night, sometimes together, sometimes alone. By the next day, the hole is deep enough to be a grave. They don’t say anything. Not one of them needs instructions on how to mourn.

Or is that not it? Are you missing something else altogether?

Would you rather hear about marches, political protests, public shaming and human rights laws? Even though we both know that never happened and we both know that it never could happen, would it comfort you, to imagine them fighting back? Would you rather hear that they all walked away from the City and never came back? Or do you prefer to pretend that they might someday return—returning, not like you did when you were fourteen and walked away and then slunk back two weeks later—not in shame, but in anger, with tank columns and cluster bombs and chains of command and theories of legitimate violence?

Believe those things, if it makes you happy. I, though, will believe that they live alone, together, in a house by the sea. 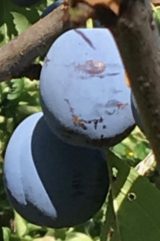 P. H. Lee’s fiction has also appeared in Worlds Without Master. In addition to their writing, P. H. Lee has worked as a game developer, tutor, graphic designer, and administrative assistant. Their hobbies include translating the Chinese classics and reading Wikipedia. They live together with several other people, far from the bells of the city.

One Response to “A House by the Sea”