The Size of a Barleycorn, Encased in Lead

And the world came into being after the Divine contracted to allow it space, and humans labored upon the face of the earth, and they called to the Name in both distress and delight.

And the Name said:
if you build me an altar of stones,
do not build it of hewn stones:
for if you lift up your tool upon it,
you have desecrated it.

And when King Shlomo built a house for the Name,
it was written:
there was neither hammer nor axe
nor any iron tool heard in the house
while it was being built.

The Master asked of the Rabbis: How shall I do this?
They told him: there is the shamir that Moshe brought for the efod.

When Moshe our teacher spoke to the Name, the Name instructed him in minute detail about the details of worship and gave him the shamir to cut the gemstones for the priestly garments.

And in the Oral Tradition it was also said
and later—after the people were scattered—
carefully codified and hand-copied:

The shamir is the size of a barleycorn;
it was created during the six days of creation,
and there is no thing as hard as to be able to withstand it.
What can contain it?
It is wrapped in tufts of wool
and put in a lead tube full of barley bran.

And humans continued to walk upon the face of the earth, well after the shamir had been lost during the destruction of the Temple; and no one knows where it went, though some say it might have sunk into the earth at the Temple Mount beside the Ark of the Covenant. And with time the knowledge of the shamir faded, and some said it had been alive, like a worm, while others said it had been akin to a stone. But the people still passed on the word from generation to generation, into our days.

And humans went on to probe the secrets of Creation not only by means of letter and divine name, but also by means of cyclotron and synchrotron; and further, fission and fusion weapons; even though it had been clearly stated never to bring tools of warfare into the house of the Name.

And humans produced materials needing containment in a fashion familiar to us who carry the knowledge of the ancient and the sacred: in tubes of lead, for no thing was able to withstand them. And humans produced them in quantities previously unprecedented, and once their usefulness was past, encased them and buried them underground.

Thus in our days it was also said,
This marking system has been designed to last 10,000 years.
If the marker is difficult to read,
add new markers in longer-lasting materials
in languages that you speak.

And the people contemplated forming a new priesthood to preserve the knowledge; thus the priests would declaim, from generation to generation:

Sending this message was important to us.
We considered ourselves to be a powerful culture
This message is a warning about danger.
The form of the danger is an emanation of energy.

And the congregation of the knowledgeable contemplated establishing fortifications to serve as a warning, to our children and our children’s children; and to erect these fortifications on top of the containment; for it was commanded by the Name: You shall strongly safeguard your souls.

Thus it was written, engraved and inscribed:
This place is not a place of honor.
Do not drill here. Do not dig here.
The danger is to the body, and it can kill.

And the materials sunk into the earth, like to the like, and remained there for many generations; until it was impossible to tell whether they had been living creatures or stones themselves, and until the only word that remained on the lips of the priests was that no thing on earth was able to withstand them.

As King Shlomo had said,
That which was shall be again,
that which had been done shall be done again,
and there is nothing new under the Sun.

And if the Name wills it so, the fortifications shall stand
and the warnings persist,
until the Messiah arrives
and the Temple is rebuilt
and the shamir resurfaces,
speedily,
in our days,
amein.

Various prayer fragments and Hebrew turns of phrase are used unmarked. For the Talmudic excerpts, in cases of rare nouns the author relied on the Soncino English translation. 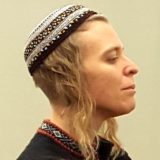 Bogi Takács is a Hungarian Jewish agender trans person (e/em/eir/emself or singular they pronouns) currently living in the US with eir family and a congregation of books. Bogi writes, reviews and edits speculative fiction, and has won the Lambda Award in 2018 for editing Transcendent 2: The Year’s Best Transgender Speculative Fiction (also a Locus award finalist book). Bogi is also a finalist for the Hugo Award in 2018 in the Best Fan Writer category. You can find em at Bogi Reads the World, and on Twitter and Patreon as @bogiperson. 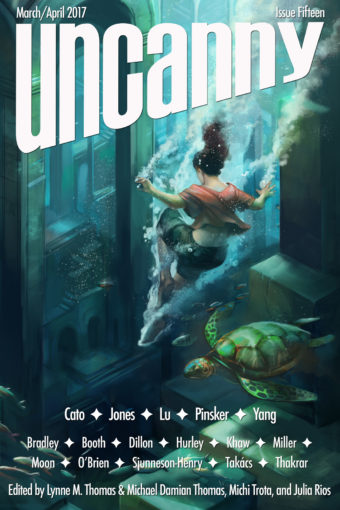